I’m having fun coming up with some Graphic 45 designs for CHA Summer. I can’t believe how much fun it is to work with this paper! Here’s a little peek at one of my projects… 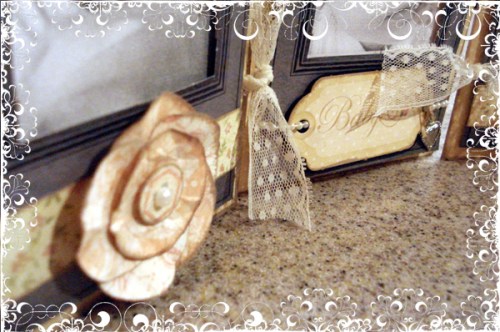 I’m working on a birthday album class that I will be teaching at PSB. Fun stuff! I’ll post some details after the class is posted on the PSB blog…

OK, just have to vent…and it’s my blog so I can, right?

Tuesdays my Father-in-law comes to watch the kids because I work late. (’til 5:50).

At 3:30pm today I received a call from my son’s bus service saying he could not get inside because the door was locked. I was astounded at how that could be because my Dad-in-law was supposed to be there.

In tears, I called my Dad-in-law. Alas he had forgotten (this was the 2nd time). At this point it was already 3:40pm and the bus had to leave (with Parker still on it of course – they won’t leave him because he has autism and cannot be left alone, and he’s only 11 for Pete’s sake). BUT worst of all this meant that my sweet little 7 year old daughter had been locked out and home alone since 2:30! Over an hour! I was hurt and I was so worried about her. My Dad-in-law said he would leave right away (which meant he would be at my house in about 15 minutes) but I still had to meet up with my son’s bus, so my girl had to remain alone until my Dad-in-law could get there.

Ahhh…it all turned out OK, the kids were both fine. Parker didn’t seem fazed although my girl was a little sad that she had to sit outside on the bench for an hour. She wasn’t upset with her Grandpa (which was sweet).

Of course I’ll forgive him…he’s human. But I had to tell you all so I guess I haven’t forgiven him completely yet. And yes, he will still be watching the kids on Tuesdays…I’ll just be calling him about a half an hour before he needs to be at my house from now on (sigh). Life happens, right?