And why is it so obvious? 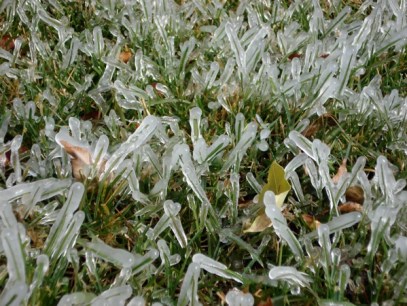 Being new to Idaho we didn’t think to turn off the sprinklers.  My kids call this phenomenon (OK it’s not really a phenomenon): Grass-sickles.

I’m sure our dog, Marely thought we were a bit crazy too…especially when I let him out to do his morning business. He was sliding around the back patio trying to make it to the grassy area.  I soon discovered that Marley does not like frozen grass.  Poor thing.

I later checked my phone messages. On the way to work, my Dad had phoned to inform us that a sprinkler had broken in front of our house (which is on a hill) and there was frozen water all the way down the block.  He continued to comment (while laughing), saying that cars were sliding around on the ice and that Dan and I should probably turn off our sprinklers. Good advice.

Besides the fact that I have yet to change my license plate from California to Idaho…the grass-sickles are a dead giveaway:

Sooner or later we’ll catch on.