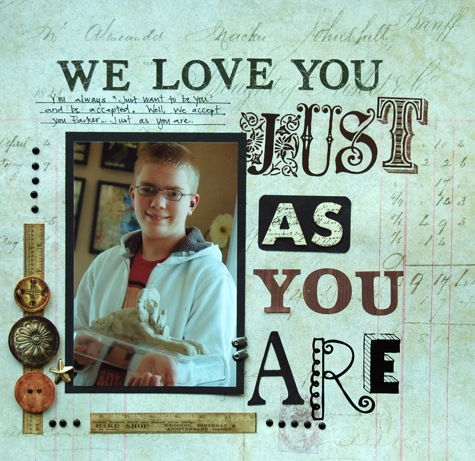 Being a teenager hasn’t been the easiest road for Parker. He struggles, especially with his brilliant mind. He wants desperately to share all of his thoughts with the world and sometimes people just don’t want to listen. I get it, he has a lot to share…sometimes too much but he is so adorable and really, really smart.

Take, for instance, the photo of Parker in the above layout. He is holding a model of the Sphinx that he created from memory. Who does that? Who can pull a picture from thin air and build a model? Parker can. I’ve seen him do it time and time again. He builds space suits out of cardboard and plastic, he builds robots using wire and foam padding…and that’s just the beginning. Parker’s memory is amazing. He can recall entire songs and scenes from movies at the drop of a hat.  Don’t even get me started on his vast knowledge about space and the human body. 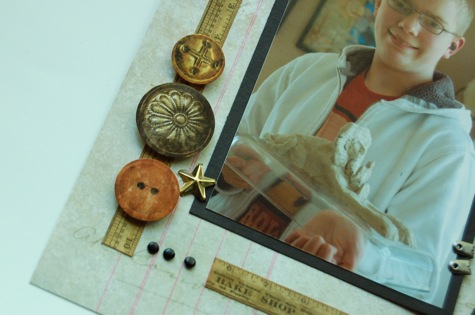 Parker wants so much for the world to accept him for who he is. I remember what is was like to be a teenager, desiring to be accepted by my friends, my family…the world. Parker struggles even more because of his autism. I have to remind Parker on a regular basis that he is a wonderful boy, so sweet, talented and amazing. I tell him that he is funny…sometimes really funny when he times his jokes right.

It is so wonderful to see the young man that Parker has become. He has learned so much and come so far in the fourteen years, 4 months and 13 days since he graced this world with his presence. Parker has endured many trials and overcome them, he has brought me so much joy and blessed my life in so many ways.

I truly believe that Parker was sent to me, for me. I love him more than he could ever understand. I remember holding him in my arms for the first time, looking at his tiny fingers and toes…I believed he was perfect. He is still perfect, just as he is.