(Play along with Candid Carrie – Fx4) 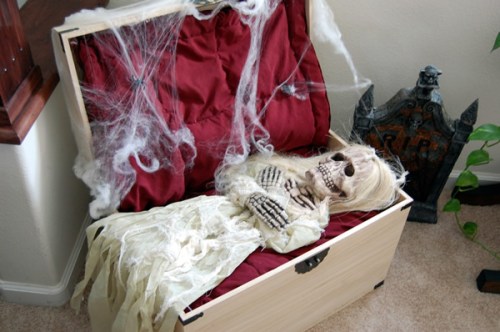 She is a real Witch. Seriously.  She is.  I swear.

At least this is what I told the 2nd and 3rd graders that came to Izabelle’s “Halloween” Birthday Party.  I made sure all the kids saw her lying in her coffin before the games began.

I made up a little story on the fly…it went something like this:

Once upon a time…in a town not too far away, there lived a woman named Lucy.

Lucy was no ordinary woman, Lucy was a witch.

When Lucy died some local children went to her house to have a look around.  What they found may surprise you…do you want to know?  OK.  I’ll tell you.

On the mantel they found a BRAIN just sitting in a jar.

{This is when my friend (and helper) passed around a bowl with a towel over it.  We told the kids to “feel” the brain they found in Lucy’s house}

Do you want to know what else they found?  It might be too scary for you?  Are you sure?

Oh, alright.  In a cupboard full of webs, they found a box.  Inside the box there were INTESTINES!

{we asked them if they wanted to feel the intestines, of course they did, so we passed them around}

The children inside Lucy’s house were getting quite frightened.  Would you be frightened in Lucy’s house?  I know I would.  But the children decided to look on…They found a treasure chest, it looked like it used to shine.  Now it was old and dusty…before they opened it one of the older kids remembered a story he had over heard his mother telling a friend.

They opened the chest, inside were thousands of TEETH!

The children were so frightened that they called the Police.  The Police sent over a Detective.

This is what the Detective discovered…Not only did Lucy the Witch collect Children’s Teeth, she also collected their FINGERS!!!

{Yep, the fingers went around the room to gross out the children}

High on a shelf in Lucy’s room the Detective found another jar, this one labeled EYEBALLS!

{around the room with the eyeballs}

The last thing the detective found was a bucket.  Inside the bucket was a HEART and worst of all it was covered with MAGGOTS!

{The heart covered in maggots was passed around the room)

This brings us to the end of our frightful tale.  Now, does anyone think I would really pass around a heart covered in Maggots?

The residing answer was “NO!”

One by one I took the towel off each bowl (of course I made them guess what was really in the bowls) and let the kids at the party LOOK and feel this time.

The kids at Izabelle’s party seriously loved this game.   I’ve never had 20 kids in one room before, much less had them be completely SILENT. They were captivated.  The kids would squeal and laugh whenever they stuck their hands inside the bowls.  I even had a mom tell me a few days later that her daughter loved it so much that she tells the story herself, especially the Tooth Fairy bit.

Ah Lucy, you did your job well. 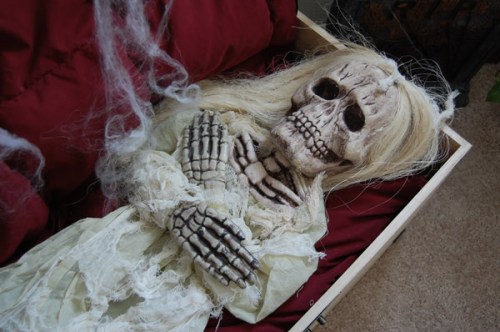 Friday Photo Halloween
Previous: You Want To Be What For Halloween?
Next: Spooky {Vintage Style}